When we decide to sightsee, we do it body and soul. It’s how we are.

It was a very big day that has brought us to fantastic places. It began at 6 am (I can hear someone stifle reading this, but yes, it’s the holidays, so we get up at 6h), to take the express bus passing at 6:50 am in the direction of Okinawa Churaumi aquarium. We planned the picnic breakfast and we arrived around 9:30 in the scene. All that to say that this expedition was prepared by the incredible talents of Xim.

I always had mixed feeling to aquariums. This is obviously an opportunity to see unique specimens, rare and precious, to contemplate the beauty and riches of the deep ocean. It has to be beautiful, because life and its diversity are either extraodinaires and beautiful. But is that all these critters would not be better to frolic in the ocean rather than turning around in an aquarium? Although it seems huge, for the animals, the glass cage may be tiny. In the largest pools, a huge building, with glass walls 60 cm thick to withstand the pressure of the water, I saw a manta that… went around the pool… again… and again… mantas are wonderfuls, they look like they are flying. They have a supple and graceful movement. A walk around the aquarium again and again.

I had the same feeling with the dolphin show. (Note: the only place where there are dolphins, this is the show in the basin. What you hear inside the aquarium, these are little children who cry :).) How beautiful it is, a dolphin. A dolphin makes pirouettes, jumps and greet you with its fin, is touching, funny and beautiful. We feel their gaming accomplices. But do they really play? At the cost of what work they do learn to relate to the hoop or a double toe loop above the water? I admire, but I have a twinge of ethical heart.

In the grounds of the Ocean Expo Park is also located the Tropical Dream Center. As its name say not necessarily indicate there is a botanical garden greenhouse… with orchids. The mere idea of ​​visiting a place like this, I was ready to faint of happiness, but it still has nothing to do with anything you can imagine: it’s even bigger and is even more beautiful. We swim in an atmosphere worthy of Laputa – Castle in the Sky of Miyazaki; missing only the robot gardeners. The architecture of the observatory is a Tower of Babel on top of which a fantastic view of the ocean awaits you. And the flowers? Thousands of thousands of flowers, one more beautiful than the other. Obviously there garlands of phalaenopsis and vanda (my next acquisition in terms of orchid…) but also rarer spécimènes, stranger, more delicate. And butterflies flit among the flowers. For people who love plants, it was happiness.

There was evidently a shop. Which is a real torture since it is not possible to get out plants of Japan. Xim sees in it a divine vengeance: no Gundam, no orchid. 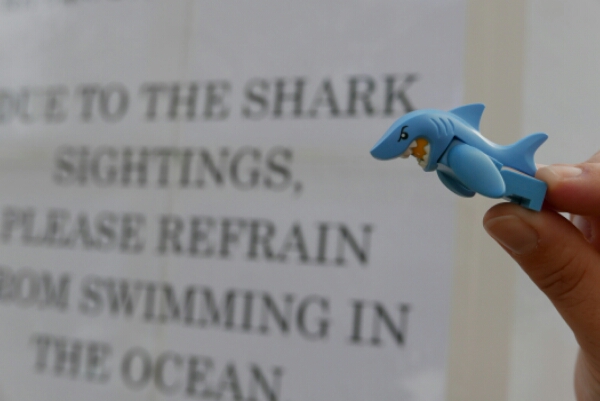 We took the bus and then a taxi to get to Sunset Beach, just in time for the sunset. In fact, we wanted to swim: we were armed with our suits, ready to change us into the bathroom just off the beach (not far from the picnic area so well organised: did I already tell you how things are well organized in Japan?). But sharks do not agree. And yes: because of the presence of reported shark, swimming is prohibited. We were very disappointed, especially since the water had to be at least 27 ° when we are soaking feet. At such a temperature, you forget the little shiver you have through the abdomen when it goes below the surface. But no, we were punished. In revenge, we said we will return.

We made a stroll in the American village, which looks like a big mall, where we ate okonomiyaki the local way. I think we have reacheed the level of “warriors of the bus” to go: we took the local bus (so nothing in English or at least in romaji) to make the hour drive separating us from the hotel. I do not know if it was luck, talent, using Google, the spirit of deduction Xim (Doctor in location, anyway), or all these factors together, but the bus dropped us to the stop 100 meters from the hotel.

Tomorrow we leave Okinawa, with the promise to return (with a valid driving license and a rental car for a week), to go to the mysterious and sensual Kyoto.

This site uses Akismet to reduce spam. Learn how your comment data is processed.